How to Use the Linux xargs Command

Home » SysAdmin » How to Use the Linux xargs Command

In this tutorial, you will learn how to use the Linux xargs command to manipulate the standard input and work with other commands. 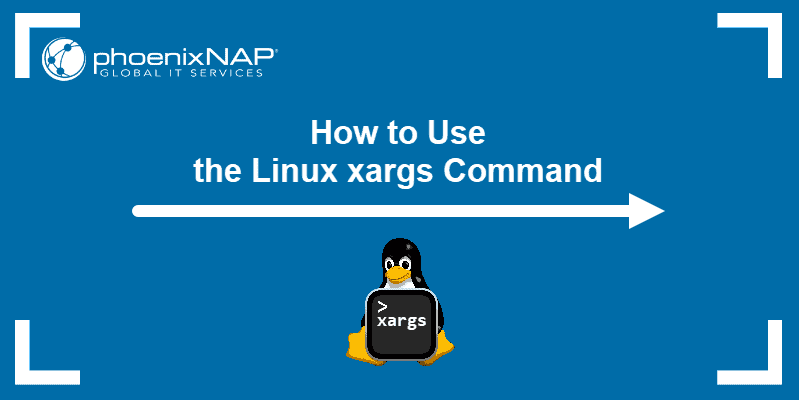 What is the xargs Command?

The xargs command builds and executes commands provided through the standard input. It takes the input and converts it into a command argument for another command. This feature is particularly useful in file management, where xargs is used in combination with rm, cp, mkdir, and other similar commands.

How to Use the xargs Command With Examples

When used on its own, xargs prompts the user to enter a text string that it then passes to the echo command.

The example shows an example input, followed by the output of the echo command.

Note: The echo command is a built-in Linux feature that prints out arguments as the standard output. echo is commonly used to display text strings or command results as messages. Learn about all the different ways you can use the echo command in Linux.

The find command often precedes xargs in a pipeline. Use it to provide a list of files for further processing by xargs. The syntax looks like this:

The example above demonstrates using the find command to find all files with the .sh extension. The list of files is then piped to xargs, which uses the rm command to delete them.

However, xargs does not automatically include files which contain blank spaces in their names. To include those files too, use the -print0 option for find, and the -0 option for xargs:

rm now deletes all the files with the .sh extension.

Use xargs with the grep command to search for a string in the list of files provided by the find command.

The example above searched for all the files with the .txt extension and piped them to xargs, which then executed the grep command on them.

To run more than one command with xargs, use the -I option. The syntax is:

In the example, the contents of file4.txt were displayed first. Then mkdir created a folder for each word in the file.

As mentioned before, xargs reads the standard input. Use the -a option to read the contents of a file instead.

When used with the tar command, xargs creates a tar.gz archive and populates it with files provided by the find command.

To see the commands executed by xargs in standard output, use the -t option.

In the example above, notice that xargs executed the mkdir command on the entire string provided by echo.

Some xargs operations, like removing files and folders, are irreversible. To control the execution of those commands, use the -p option.

When you execute the command with the -p option, xargs displays a confirmation line before executing it. Type y to proceed, or n to cancel the operation.

In the example below, xargs takes the string from the echo command and splits it into three. Then it executes another echo for each of the parts:

The default xargs delimiter is a blank space. To change the default delimiter, use the -d command followed by a single character or an escape character such as n (a new line).

In the example below, the xargs command instructs the system to use * as a delimiter and apply mkdir to each of the obtained arguments.

Use xargs to organize the output of the commands, such as cut. Consider the following example:

The cut command accesses the /etc/passwd file and uses the : delimiter to cut the beginning of each line in the file. The output is then piped to sort, which sorts the received strings, and finally to xargs that displays them:

Since xargs ignores blank spaces when looking for arguments, the command is useful for removing unnecessary blank spaces from strings.

Use xargs with the wc command to display a list of files with the line, word, and character count.

The example below instructed the ls command to pipe to xargs only the files containing the word “example”. xargs then applied wc to that list:

Copy files to multiple directories using the xargs command. The syntax is simple:

The echo command provides directory names, and xargs uses the cp command to copy the given file into each of the directories.

After completing this tutorial, you should know how to use the xargs command. The article provided a list of command options and showed how to use xargs in combination with the commands that are frequently used with it.

Marko Aleksic
Marko Aleksić is a Technical Writer at phoenixNAP. His innate curiosity regarding all things IT, combined with over a decade long background in writing, teaching and working in IT-related fields, led him to technical writing, where he has an opportunity to employ his skills and make technology less daunting to everyone.
Next you should read
SysAdmin Web Servers
How to Use the Linux tee Command
By default in Linux, a command received through standard input writes directly to standard output. The tee...
Read more
DevOps and Development SysAdmin
How to Use Linux Cat Command (With Examples)
The cat command, short for concatenate, is used to display the contents of one or more files, without having...
Read more
SysAdmin Web Servers
Linux Commands Cheat Sheet: With Examples
A list of all the important Linux commands in one place. Find the command you need, whenever you need it or...
Read more
DevOps and Development SysAdmin
How to Extract or Unzip tar.gz Files from Linux Command Line
This article shows which commands best to use when compressing and decompressing files from the command line.
Read more
© 2021 Copyright phoenixNAP | Global IT Services. All Rights Reserved.