How to Use Linux dig Command (DNS Lookup)

Home » Networking » How to Use Linux dig Command (DNS Lookup)

This guide will help you understand and use the Linux dig command. 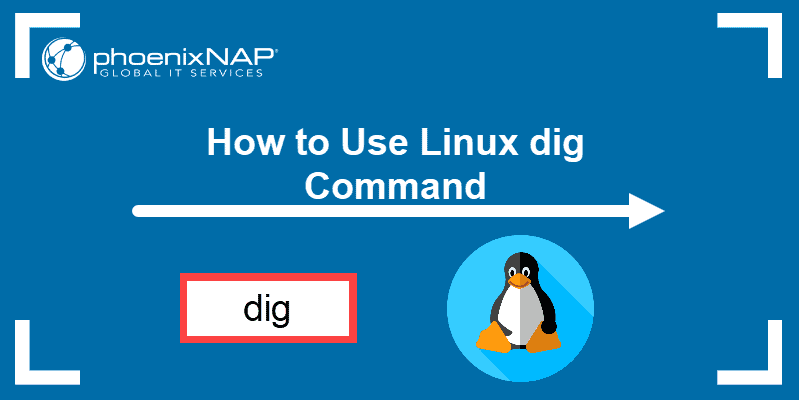 Most modern Linux systems include the dig command.

Verify that it’s installed by checking the software version. To do so, open a command line and enter the following:

The system should respond with a numeric code. If the system can’t find the command specified, install dig by entering the following:

For more information on CentOS and RHEL, please refer to our article on How to Install dig on CentOS 7 and 8.

The dig command is used as follows:

[server] – The hostname or IP address the query is directed to
[name] – The DNS (Domain Name Server) of the server to query
[type] – The type of DNS record to retrieve. By default (or if left blank), dig uses the A record type

The digcommand resolves the hostname before proceeding with querying the name server.

How to Use the dig Command With Examples

Le’ts look at the basic usage of the dig command.

The dig command enables searching for a domain name. To perform a DNS lookup, open the terminal and type:

You should see something similar to the following: 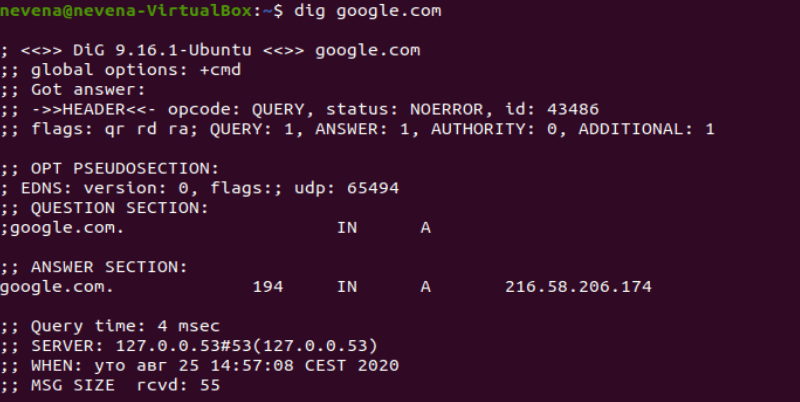 The most important section is the ANSWER section: 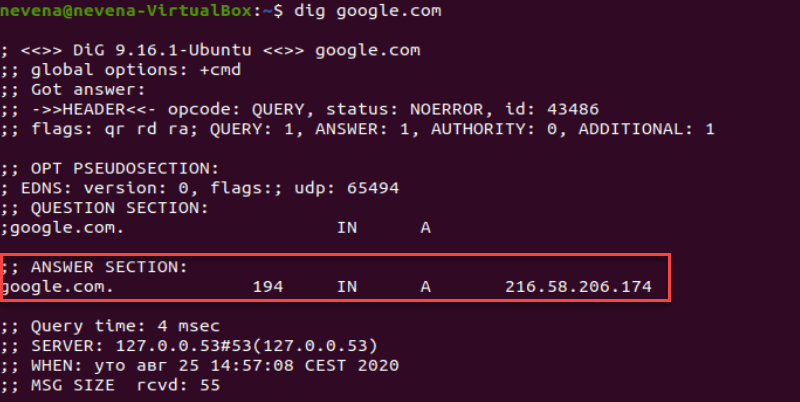 Other lines can be translated as follows:

The first line displays the version of the dig command.

The HEADER section shows the information it received from the server. Flags refer to the answer format. 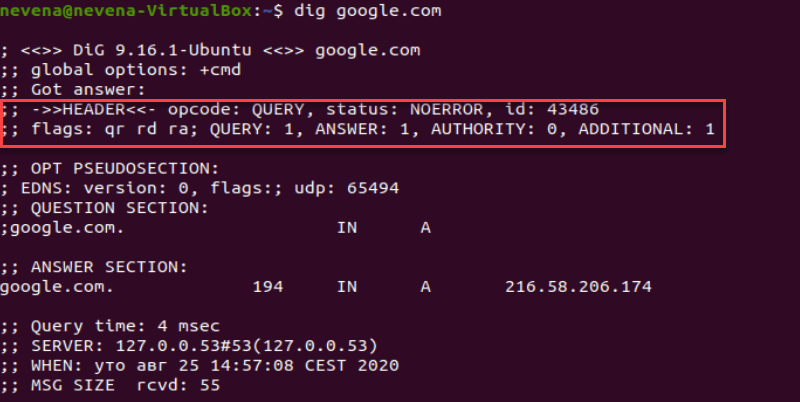 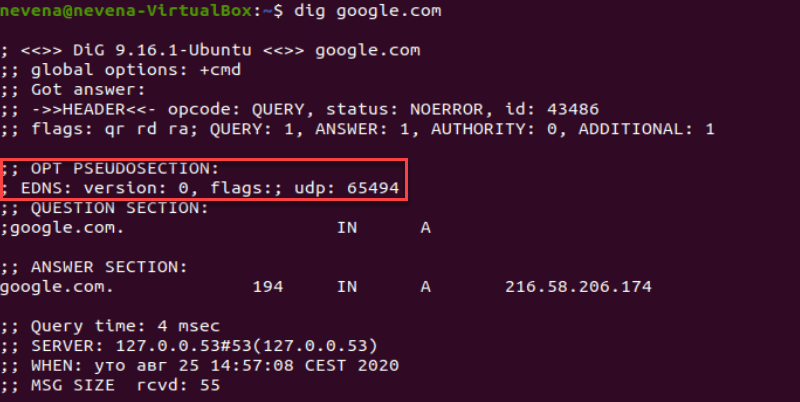 The QUESTION section displays the query data that was sent: 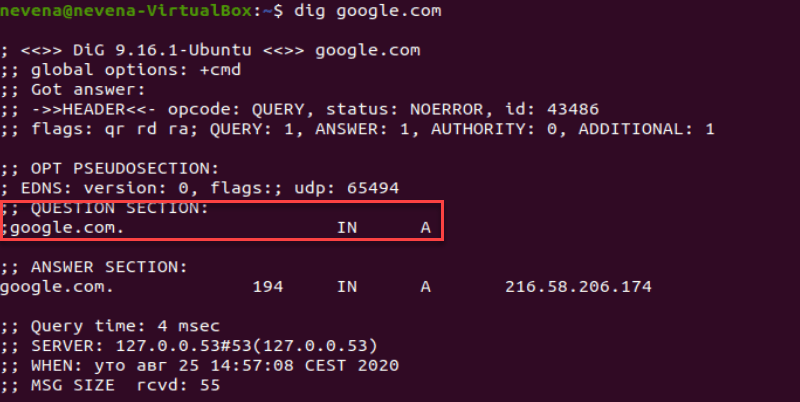 The STATISTICS section shows metadata about the query: 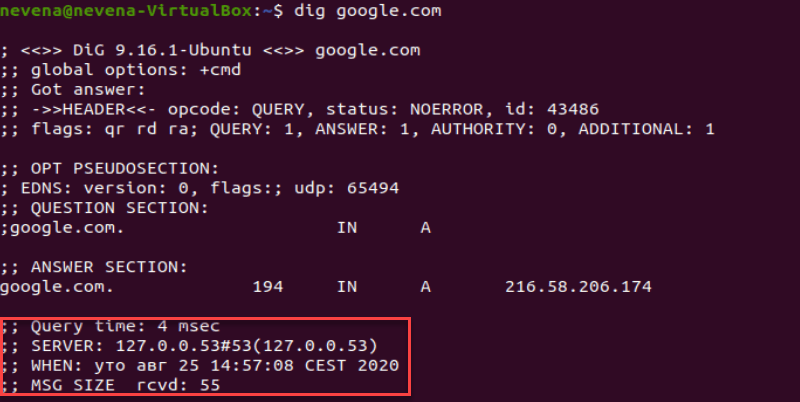 By default, dig uses the local configuration to decide which nameserver to query. Use the following command to specify Google’s domain server:

The terminal prints out the following output: 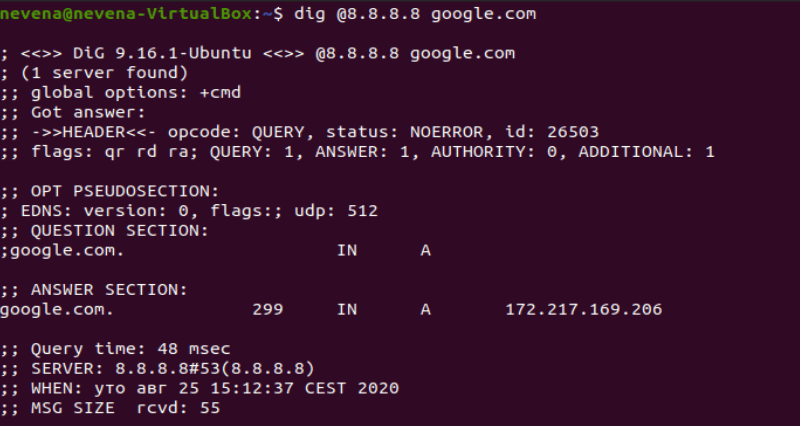 Note: Other domain nameservers can be specified here, such as your server hosting company or the internet service provider’s DNS server.

To return all of the results of the query, use the following:

The system will list all google.com DNS records that it finds, along with the IP addresses. 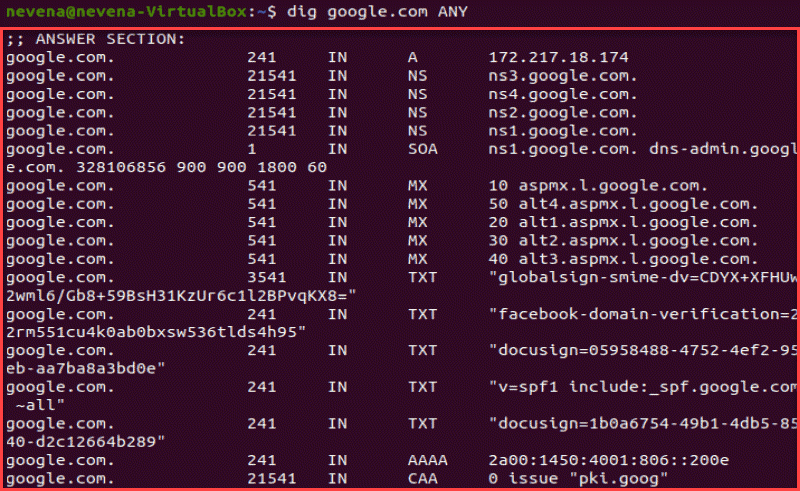 Note: Any other type of record can be substituted for the ANY option. This includes the MX (mail exchange) type, A (Address) type, SIG (Signature) type, etc. There are many different DNS record types. If you are not sure, leave the type option blank.

To display only the IP address associated with the domain name, enter the following:

The output displays the content as in the image below:

Run  +noall +answer with the dig command to access detailed information in the answers section:

The example below displays the expected output.

The +trace option lists each different server the query goes through to its final destination. Use this command option to identify the IP address where traffic is dropping.

The output should be similar to the one seen below: 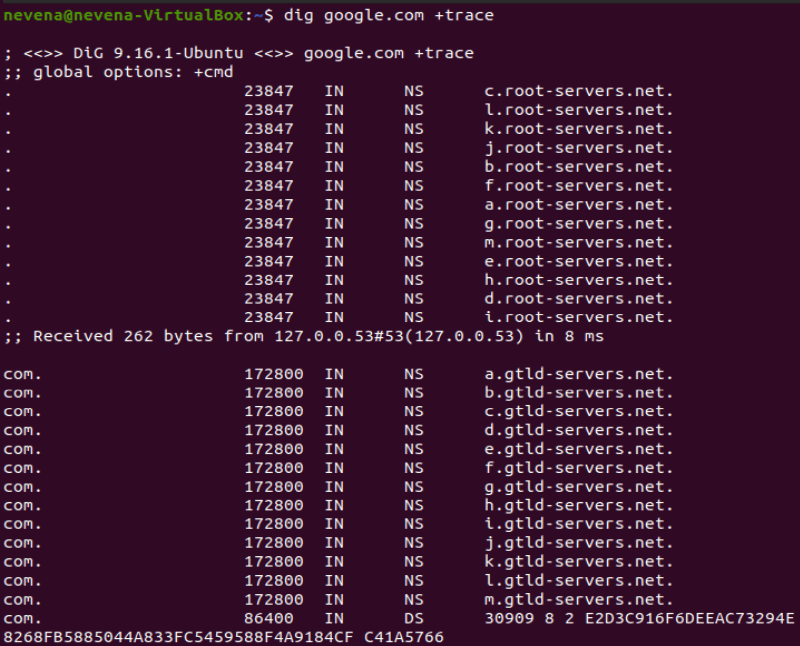 To look up a domain name by its IP address, type the following:

The output displays content as in the image below: 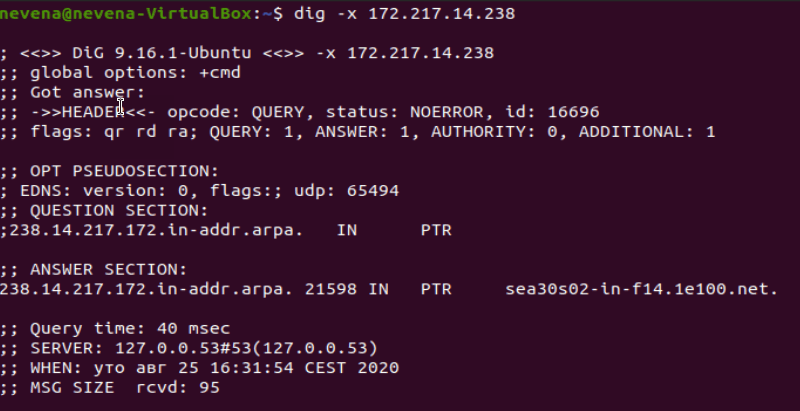 The -x option allows you to specify the IP address instead of a domain name. This can be combined with other options:

The example below displays the expected output.

Batch Mode for Reading Host Names From a File

To look up multiple entries, start by creating a file to store the domain names:

See example on the image below:

Add several websites of interest as in the image below:

Save the file and exit. Now, specify the file using the -f option in the dig command:

See an example of the output of the command below:

Note: The +short option keeps the results manageable. Any other option can be used instead.

The information displayed by dig can be altered in the ~/.digrc file. Open the file for editing with the following command:

See an example in the image below:

You should only see the answers command, as if you had manually added +noall and +answer.

You should now be familiar with the dig command in Linux. This command can help you find more information about Domain Nameservers.

Next, we recommend learning more about best DNS practices for security and performance and how to flush DNS to delete all saved DNS lookup information.

Nevena Pavlicic
Nevena Pavlicic is an aspiring Technical Writer at PhoenixNAP with experience in writing user manuals and blog posts. She has always enjoyed researching and building knowledge on cutting edge technologies, but she is also passionate about simplifying complex concepts.
Next you should read
Networking Web Servers
What is a Domain Name System (DNS) & How Does it Work?
Domain Name System (DNS) first emerged in the early 1980s. It represents a system of interconnected servers...
Read more
Networking SysAdmin
How to Configure CentOS Network Settings
Configure CentOS network settings using the command line or the Network Manager TUI. This guide shows you how...
Read more
Networking SysAdmin
How to Change or Set Hostname on CentOS 8 / RHEL 8
If you decide to change your hostname, you have multiple available options to do so. Follow the methods in...
Read more
Backup and Recovery Virtualization
How to Create Recovery Media and Perform Bare Metal Restore from Veeam Cloud Connect
If you are phoenixNAP customer and need to learn how to create a recovery media and perform Bare Metal...
Read more
© 2021 Copyright phoenixNAP | Global IT Services. All Rights Reserved.