How to Extract or Unzip tar.gz Files from Linux Command Line

Home » DevOps and Development » How to Extract or Unzip tar.gz Files from Linux Command Line

A tar.gz file contains several compressed files to save storage space, as well as bandwidth during the downloading process. The .tar file acts as a portable container for other files and is sometimes called a tarball. The .gz part of the extension, stands for gzip, a commonly-used compression utility.

In this guide you will learn how to extract or unzip files from tar.gz files using command-line in Linux.

Gzip by default, extracts the file in the current directory. In this example the file is located in the Documents directory.

Below, we have used the file named test.txt. Use the name of the file you want to compress instead.

to compress a single file with gzip enter the command in your terminal window:

After zipping the file, enter the command ls to confirm that the file has been compressed. The output confirms that the file now has a .gz extension.

To decompress a file, use the gunzip command:

Again, use the ls command to confirm the extension of the file.

To compress all the .txt files in a particular directory, type in:

The * sign is a wildcard, which means “any number of any characters.” This command would work on any (and all) filenames with the extension .txt.

This technique can be used on other file types including gzip.txt, .jpg, and .doc.

A tar.gz file is a combination of a .tar file and a .gz file. It is an archive file with several other files inside it, which is then compressed.

You can unzip these files the same way you would unzip a regular zipped file: 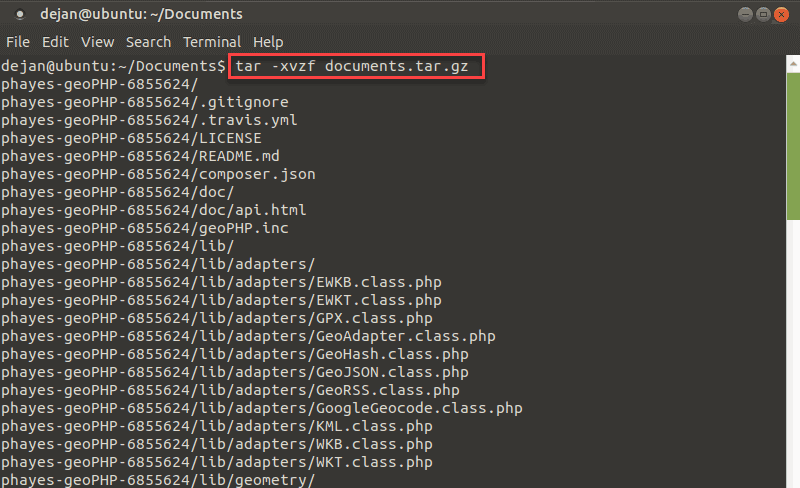 The basic command is tar, followed by four options:

To list the contents of a .tar file before you extract it, enter:

To instruct tar to put the extracted unzipped files into a specific directory, enter:

To create a tar.gz file, use the following command:

Similar to the tar command, it condenses all the content located in the /home/user/Documents directory into a single file, called documents.tar.gz. The addition of the –z option is what signals tar to compress the files.

To add multiple files to a tar file, use the command:

This copies the contents of your Documents folder into a single file, called documents.tar. The options -cvf work as follows:

To extract the files from a .tar file, enter:

This command extracts and lists all files from the documents.tar file. The -x option tells tar to extract the files.

You can also use xargs with tar to create a tar.gz archive and populate it with files from the find command.

Note: Some graphical interfaces include a tool for managing tar.gz files without the command-line. Simply right-click the item you want to compress, mouseover compress, and choose tar.gz. You can also right-click a tar.gz file, mouseover extract, and select an option to unpack the archive.

This tutorial explains how to use the tar tool, the gzip tool, and how to utilize them together to work with tar.gz files. You are now ready to extract or unzip any tar.gz file.

Dejan Tucakov
Dejan is the Head of Content at phoenixNAP with over 7 years of experience in Web publishing and technical writing. Prior to joining PNAP, he was Chief Editor of several websites striving to advocate for emerging technologies. He is dedicated to simplifying complex notions and providing meaningful insight into data center and cloud technology.
Next you should read
SysAdmin Web Servers
Linux Commands Cheat Sheet: With Examples
A list of all the important Linux commands in one place. Find the command you need, whenever you need it or...
Read more
SysAdmin
How to Unzip a ZIP File in Ubuntu / Linux
Zip files are ubiquitously used on all operating system, including Linux. This simple guide explains how to...
Read more
Security SysAdmin
19 Common SSH Commands in Linux With Examples
Secure Shell is an important protocol for anyone managing and controlling remote machines. This guide covers...
Read more
Security Web Servers
How to Set up & Configure ModSecurity on Apache
ModSecurity is an Open-source firewall application for Apache. Learn how to Setup & Configure ModSecurity on...
Read more
© 2021 Copyright phoenixNAP | Global IT Services. All Rights Reserved.